Skip to Main Content
It looks like you're using Internet Explorer 11 or older. This website works best with modern browsers such as the latest versions of Chrome, Firefox, Safari, and Edge. If you continue with this browser, you may see unexpected results.
Libraries

A guide to tools and resources on the topic of Nutrition.

What is Evidence-Based Practice (EBP)?

Evidence Based Practice (EBP) is the process of making clinical decisions based upon evidence, combined with clinical experience and patient expectations. 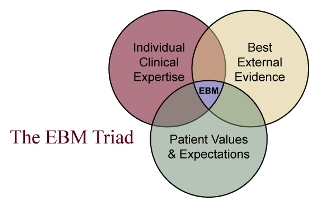 How to use PICO

Build a Clinical Question with the PICO Framework

After first identifying an information need, the next step in evidence-based practice is to re-frame the problem by posing a clearly stated and searchable question. EBP practitioners use a structure called PICO to advance their thoughts from fuzzy and generalized to crisp and precise.

PICO is a framework for structuring a clinical question by separating it into four components. Framing PICO helps you identify some of the keywords you will use in searching databases.

P = What are the significant characteristics of the patient or the population?

I = What intervention are you considering?

C = Are you considering another intervention as a comparison to the first?

O = What is the desired outcome of the intervention(s)?

(Time is sometimes a fifth element of PICO.)

(T) = How much time does it take for an intervention to reach an outcome?

Which Study Designs are best for answering my clinical question?

An evidence pyramid visually depicts the evidential strength of different research designs. The image below is one of several available renderings of an evidence pyramid. Studies with the highest internal validity, characterized by a high degree of quantitative analysis, review, analysis, and stringent scientific methodology, are at the top of the pyramid. Observational research and expert opinion reside at the bottom of the pyramid. 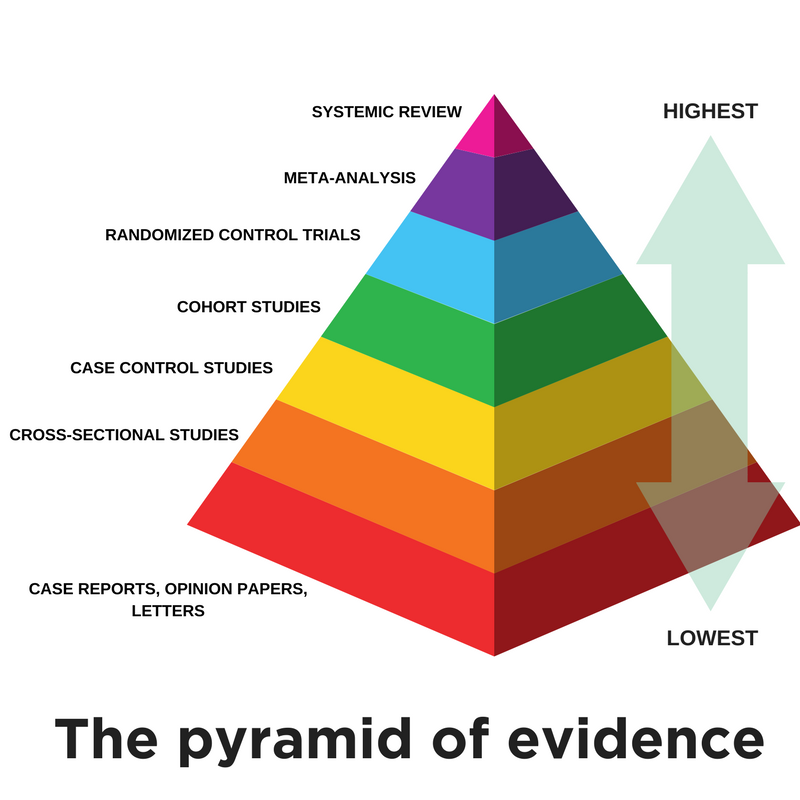 Systematic Review
A summary of the clinical literature. A systematic review is a critical assessment and evaluation of all research studies that address a particular clinical issue. The researchers use an organized method of locating, assembling, and evaluating a body of literature on a particular topic using a set of specific criteria. A systematic review typically includes a description of the findings of the collection of research studies. [AHRQ Glossary of Terms]

Meta-Analysis
A work consisting of studies using a quantitative method of combining the results of independent studies (usually drawn from the published literature) and synthesizing summaries and conclusions which may be used to evaluate therapeutic effectiveness, plan new studies, etc. It is often an overview of clinical trials. It is usually called a meta-analysis by the author or sponsoring body and should be differentiated from reviews of literature. [PubMed]

Randomized Controlled Trial
A controlled clinical trial that randomly (by chance) assigns participants to two or more groups. There are various methods to randomize study participants to their groups. [AHRQ Glossary of Terms]

Cohort Study
A clinical research study in which people who presently have a certain condition or receive a particular treatment are followed over time and compared with another group of people who are not affected by the condition. [AHRQ Glossary of Terms]

Case Control Study
The observational epidemiologic study of persons with the disease (or other outcome variable) of interest and a suitable control (comparison, reference) group of persons without the disease. The relationship of an attribute to the disease is examined by comparing the diseased and nondiseased with regard to how frequently the attribute is present or, if quantitative, the levels of the attribute, in each of the groups. [OCEBM Table of Evidence Glossary]

Case Series
A group or series of case reports involving patients who were given similar treatment. Reports of case series usually contain detailed information about the individual patients. This includes demographic information (for example, age, gender, ethnic origin) and information on diagnosis, treatment, response to treatment, and follow-up after treatment. [OCEBM Table of Evidence Glossary]

Case Study
An investigation of a single subject or a single unit, which could be a small number of individuals who seem to be representative of a larger group or very different from it. [Dictionary of Nursing Theory and Research, Fourth Edition]

Editorial
Work consisting of a statement of the opinions, beliefs, and policy of the editor or publisher of a journal, usually on current matters of medical or scientific significance to the medical community or society at large. The editorials published by editors of journals representing the official organ of a society or organization are generally substantive. [PubMed]

Opinion
A belief or conclusion held with confidence but not substantiated by positive knowledge or proof. [The Free Dictionary]

Animal Research
A laboratory experiment using animals to study the development and progression of diseases. Animal studies also test how safe and effective new treatments are before they are tested in people. [NCI Dictionary of Cancer Terms]